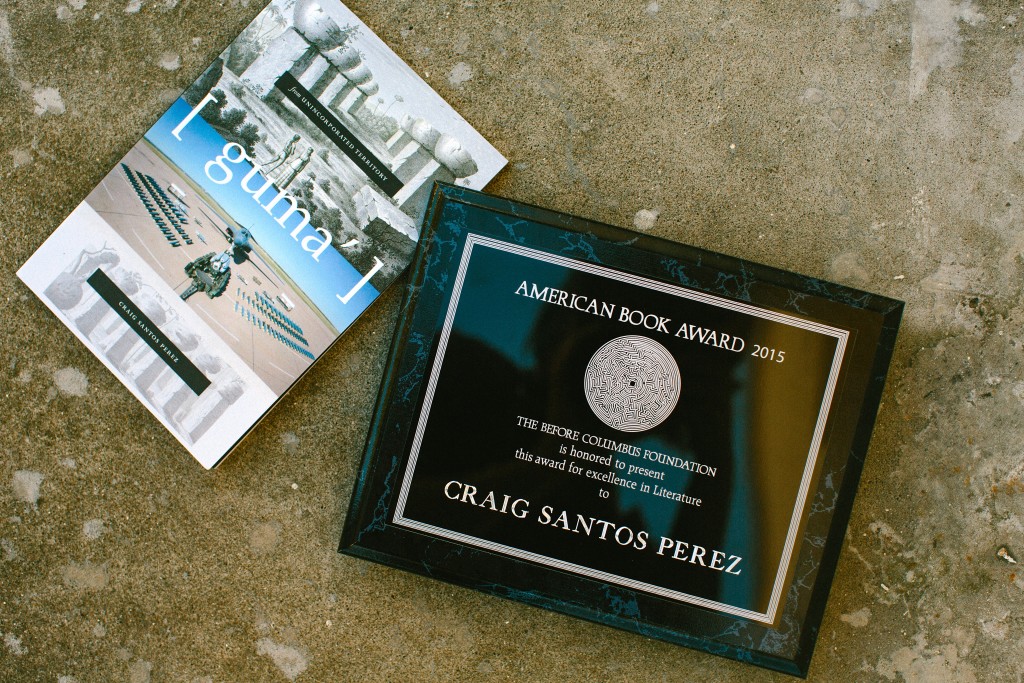 Craig Santos Perez MFA ’06 is a 2015 winner of the American Book Award for his poetry collection from unincorporated territory [guma’], about his home island of Guam.

Winner of the American Book Award 2015 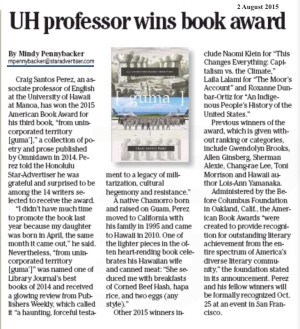 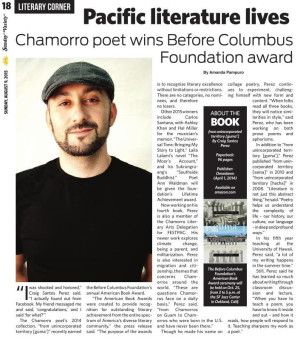 Commendation by Joy Harjo: “We honor Craig Santos Perez for his collection of poems: unincorporated territory [guma’]. This book is a brilliant lyrical testimony of a Chamorro state of being, a kind of environmental study to assess the ability to thrive despite militarization, a sparring between coconut and Spam, and a manual to consult because colonization means that we are in a state of emergency. This collection honors the Chamorro, the person who is the island called “Guam” and the spirit of poetry. This book is an island in your hands, your heart. Mvto (muh-doe). Mahalo nui loa. Congratulations.”

“By turns cultural and ecological artifact, personal narrative, body count, and colonial (and resistance) document, Perez’s third collection advances a disturbing, fractured narrative using an impressively wide swath of poetic forms and techniques: prose sections are interrupted by domestic and patriotic language, interweaving the Japanese and American captures of Guam (the author’s birthplace) with the narrator’s personal history and the current wars in the Middle East: “My grandpa o saina struggles to tell his story. The US passed the Guam Meritorious Claims act… His eyes become saltmemories thread fathoms of water. He looks at his empty hands to pledge allegiance.” Wiry, short-lined verse is collaged with Chamorro (a threatened Malayo-Polynesian language) and public comments from Draft Environmental Impact Statements in Guam. The names of Guamanian soldiers killed in action in current U.S. military operations, year by year, stand out against the circumstances of their deaths: “[U.S. Army Sgt. Iosiwo Uruo died in Iraq of wounds suffered when his unit came under attack by enemy forces. He was 27.]” Amid this, Perez returns to the story of the Micronesian Kingfisher, an endangered species on Guam whose existing members are all descended from American-captured, captive-bred zoo birds: “-of trespass—[i sihek]// when land is/ caged [we]// -of theft—[i sihek]// are caged within/ our disappearance.” This is a haunting, forceful testament to a legacy of militarization, cultural hegemony, and resistance. (Apr.)” 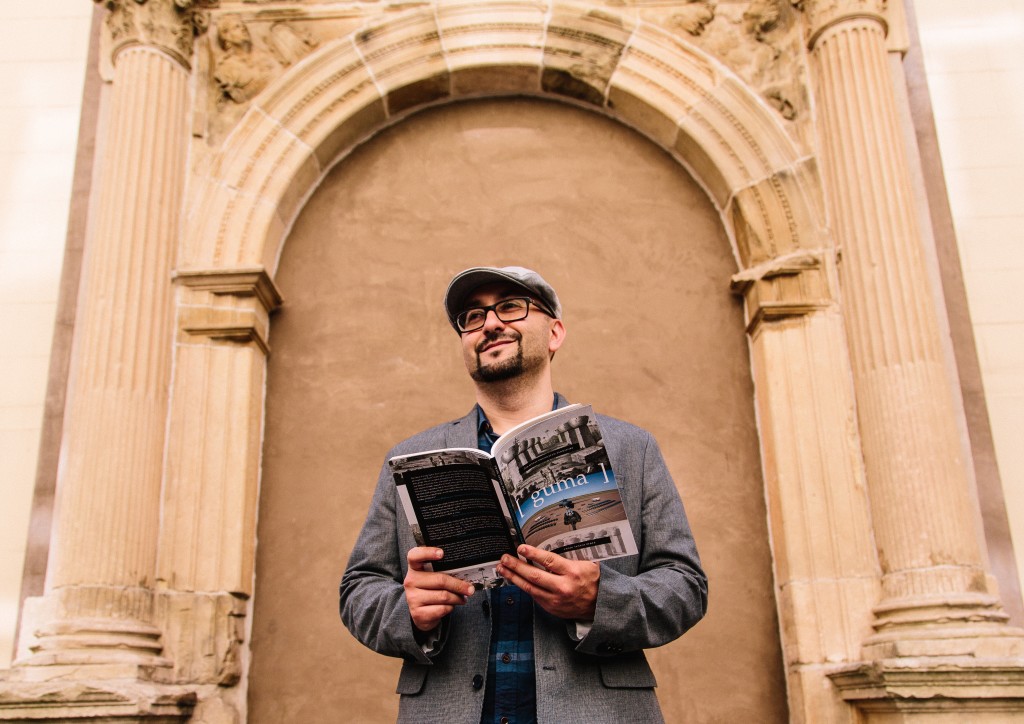 Craig Santos Perez MFA ’06 is a 2015 winner of the American Book Award for his poetry collection from unincorporated territory [guma’], about his home island of Guam.

“This latest of Craig Santos Perez’s poetic series, from unincorporated territory [guma’], interrogates what “home” means when you are ancestrally and genealogically from an island and a people who are occupied and militarized to further American empire, when you and your family are forced to leave your island out of economic necessity, when you return to find your island so brutally changed to be nearly unrecognizable. With searing and brave honesty, Perez lays bare colonialism and its devastating injustices, while his fierce love for his people and island stand strong as the latte stones of his Chamoru ancestors. You can’t look at Guåhan, the American-occupied Pacific, nor the United States the same after reading these pages. Free Guåhan and Hawaiʻi!”

“Craig Santos Perez is quite simply writing some of the most significant poetry of the early 21st century. Employing struck-through lists of dead soldiers, fractured diary entries on a return to Guam or shoplifting Vienna Sausages, public comments from Draft Environmental Impact Statements, and searing poems of brevity and heart, Perez is re-mapping a post-colonial America, one pitch-perfect syllable at a time.”

“The navigation strategies of this writing trouble the water and, in so doing, conjure officially unincorporated territory into a new and decidedly unofficial being, one vocal, trans-oceanic, multiple, and searching. Song—“to sing/ forward…to/ sing past”—is part of the superflux; so, necessarily, is the corporeal—“my body these excerpts.” And in these pages the conjuration, Craig Santos-Perez’s appeal, his long-term accounting of what “the meaning of Guam” might be, continues on magnificently.”

“The industrial militarization of Guam clearly did not assess Chamoru poet resiliency in the long-term feasibility analysis. Here, in guma, we enter the waving imbrications in remarkable keyhole clarity, fitted to resist propelling and plummeting with each intended subdual, each Spam infused recruit, each distraught dislocation until we are fulsomely brought to that tiny dot and realize the centripetal force was here all along. Every line here is a bit of incantatory embrace, flush with complex and sincere measure, this, the poet’s song and we are graced with it. An amazing volume, give Craig Santos Perez all the prizes. He’s earned them.”