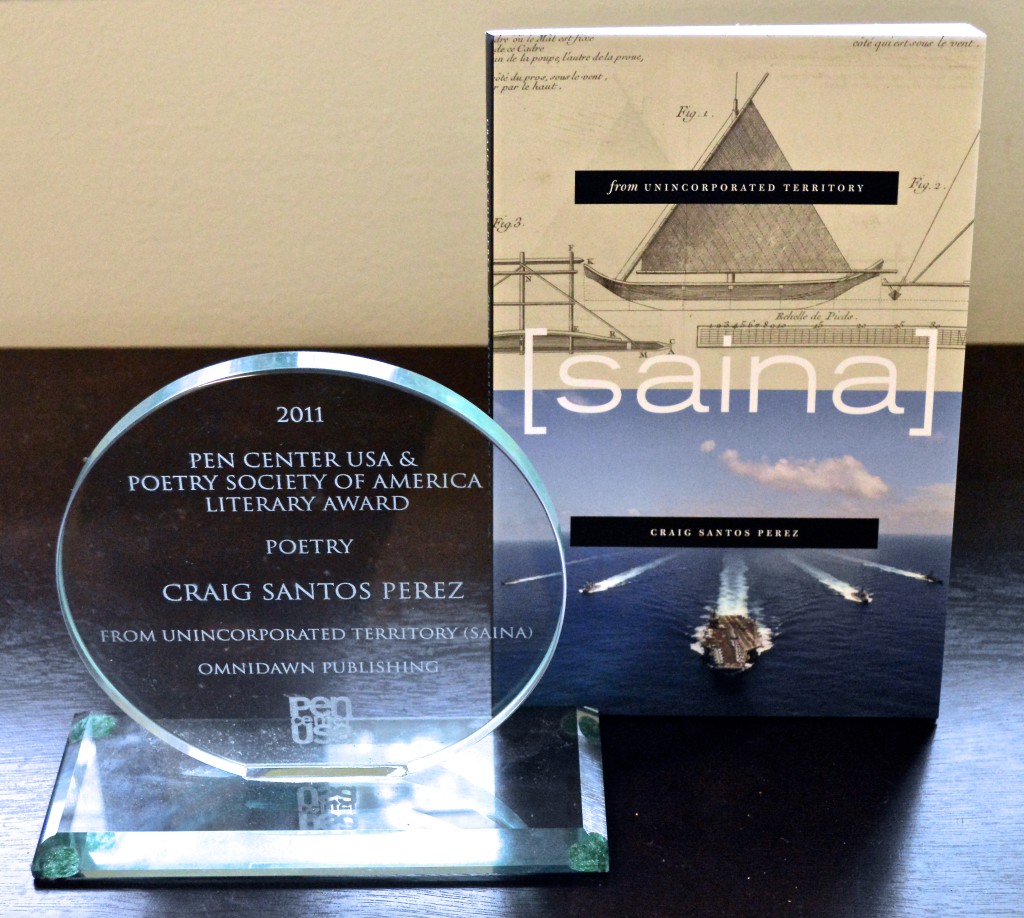 Note from the Publisher

With the Saina as his figurative vessel  — a ship built in modern times as an exact replica of the swift outriggers designed and sailed by the Chamorro people until banned by their oppressors  — Craig Santos Perez deftly navigates the complexities in his bracing exploration of the personal, historical, cultural, and natural elements of his native Guam and its people. As the title, — from unincorporated territory [saina] — suggests, by understanding where we are from, we can best determine where we are going. Perez collages primary texts and oral histories of the colonial domination and abuse brought by the Spanish, the Japanese, the United States, and the capitalist entertainment/travel industry, with intimate stories of his childhood experiences on Guam, his family’s immigration to the US, and the evocatively fragmentary myths of his ancestors. Resonant too in Perez’s title, and throughout this work, is this poet’s evocation of the unincorporated and unfathomed elements of our natures, as he seeks the means to access an expansiveness that remains inexpressible in any language. Perez is not afraid to press language beyond the territories of ‘the known’ as he investigates both the anguish and the possibilities that horizon as one attempts to communicate the spoken and unspoken languages of one’s native people, while fully appreciating the suffering inherent in every word he will use that is pronounced in, and thus pronounces, the language of their oppressors.

Praise for from unincorporated territory [saina]

from unincorporated territory [saina] continues Craig Santos Perez’s epic investigation of Chamorro culture, language, and identity. It is by turns ferocious and elegiac, historical and lyrical; it is a book of generations, of sedimentary language, of the ability and power to say “us,” of how a human family might actually be claimed. Filled with tidal spaces, broken by waves, garlanded by islands of brilliant attention and sub-surface groundings, Perez’s poem convenes an oceanic poetics. But if the indigenous canoe that sails through the book is freighted with immigration and emigration, colonialism and national piracies, its real cargo remains cultural authority and the incontestable wonder of origin. Ancestors weep and dance to have generated such creative reclamation as this poem achieves. Perez inherits, inhabits… and a great poem flows…

In from unincorporated territory [saina], Craig Santos Perez––whose very name sounds a poem–– sends his reader out on a simultaneously sturdy and yet amorphous canoe, to discover, explore, circle and espy the oldest and most continuous global story: the imperialist, systematic destruction of a culture. Perez takes the water, sky, land, lost legends, ancestral spirits, and survivors of the Pacific Islands into his own tongue, complicated by “torrents of English,” enlivened by Chamoru. This is a great seafarer’s tale of our own lost oceans, lost no more. Reading this book, I was disabused of the notion that “poetry does nothing.”

from unincorporated territory [saina], Craig Santos Perez’s second book of poems, is a touching and loving tribute to his grandmother, Milan Martinez Portusach Santos Reyes.  As a central figure in his poems, “Grandma Santos” comes across as one of the more powerful metaphors and realities of survival in Guam: the sakman, or the long-range voyaging canoe.  Perez and Santos thus embark on an oceanic journey from Guam to California, where they now reside, reflecting on a shared past of colonial violence and on an equally fraught and sometimes uncertain present.  In the end, Grandma Santos assures Perez that her sakman, their sakman, will always be a vessel through which generations of Chamorros may navigate their respective futures.  Saina and Sakman, Perez and Santos.  These are the threads which link the poetic forms presented in Craig Santos Perez’s latest collection, which, to be sure, is a pleasure to read.

Saina reinscribes the contested territories of home(land) with shards of language and form.  Fragments of English and Chamoru, Spanish and Japanese, trace violent routes of empire, colliding, weaving, one into the other.  With admirable craft, Craig Santos Perez stitches together patches of jagged memory – Grandma and Grandpa forced to bow to Japanese soldiers; tradition – ‘flying proas’/ sea-going outriggers, fastest in the world; and the continued trauma of US military occupation in Guam — into a garment of uneasy identities so characteristic of our neo/colonial moment. With its powerful, discordant music, Saina is a warrior response to the ‘call’ of empire. Bravo.

To read [Craig] Santos Perez is to experience a brave act of recovery as he continues to write the history and culture of the Chamorro people in Guam back into the language of visibility and vibrancy.

Craig Santos Perez’s second book, from Unincorporated Territory (Sainaz) (Omnidawn), makes undeniably clear why so many people seem excited about his work, and why he’s a writer who  certainly will be going on to have a powerful effect on contemporary poetry. This is an impressive, even intimidating, book. Historically detailed about both the history of Guam and the history of his own family both in Guam and beyond, this is a book about politics, race, culture and the often grim facts about what goes undocumented and unheard—or worse, what does get documented, but in the most abusive and detached pseudo-objective and exploitative capitalist ways. These poems offer a powerful indictment of the history of U.S. misuse of Guam, its land, its water, and its citizens, and the combination of large-scale documentation and individual memoir make the damages brutally clear and often emotionally wrenching. The book works with the Chamorro language as well as English, and features a fascinating array of extreme aesthetic experiments. It’s difficult to capture the open-field poetics of these poems in the limited space options of a blog review. “i didn’t know ‘sea level’/would remind me of ‘shelter’/in the material sheaths of the body the smallest wave pronounces/’light derives from/what it touches.’”