This book was originally published in 2008 (now out of print). In 2017, Omnidawn Publishing released a new, updated version of the book with a new cover, interior design, images, and afterword. This version is available at the Omnidawn site here. 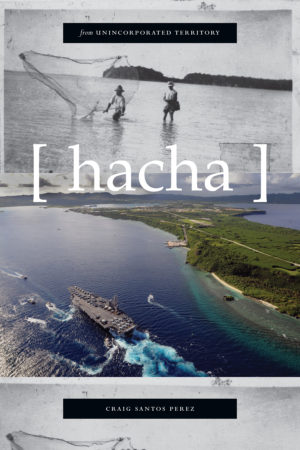 REPRINTED WITH A NEW AFTERWORD BY THE AUTHOR

from unincorporated territory [hacha] is the first book of native Chamorro poet Craig Santos Perez’s ongoing series about his homeland, the Western Pacific Island of Guåhan (Guam). Perez weaves avant-garde, eco-poetic, indigenous, documentary, multilingual, and abstract expressionist modes to tell the complex story of Guam’s people, culture, history, politics, and ecologies. Since its original publication in 2008, [hacha] has received positive reviews, and it has been taught in universities throughout Asia, the Pacific, the United States, Canada, and Europe. Several scholars have written essays about Perez’s work in American Literary History, The Journal of Transnational American Studies, The Contemporary Pacific, Green Letters: Studies in Ecocriticsm, Literary Geographies, and The Cambridge Companion to Postcolonial Poetry. This new and revised edition aims to bring the book to a new generation of readers.

Small Press Spotlight at Critical Mass: The Blog of the National Book Critics Circle Board of Directors

Praise for from unincorporated territory [hacha]

The act of remembering is the art of recovery, and the art of reclaiming a past that has never been hidden only silenced is an act of responsibility. Craig Perez Santos has arrived to give voice and meaning to the unheralded narratives with his fierce debut “from unincorporated territory.” At once a palimpsest and an archive of “retrievable history,” this book of poems is sure to place Guam on both the literary and geographical maps. This poet of consciousness, of communal memory, and of political fury, has undone the callous erasure of imperialism and empowered his people’s folklore, stories and journeys. Craig Perez Santos is a poet with a mission, and with the skill and battle cry to do it right.

In Craig Santos Perez’s from unincorporated territory we hear the movement of the Pacific Ocean; turning each page we hear the oars of the people navigating this ocean. This is a smart, formalistically rigorous, and unapologetically political collection of poetry. Personal, tender, and tough, Perez’s poems, collages of text and images offer a necessary critical, historical perspective on American ownership, Western tourism, and simultaneous erasure of the island of Guam. from unincorporated territory rejects the blank space on American maps and in American consciousness. This is a very satisfying read that I will return to again and again.

Perez’s deft first book delivers a Guam outside the story of the ‘nation,’ reminding us who and what is ‘from’ his island through the biography of touch, and the intermingled military and colonialist histories brought to the Chamorro people from far across the ocean. 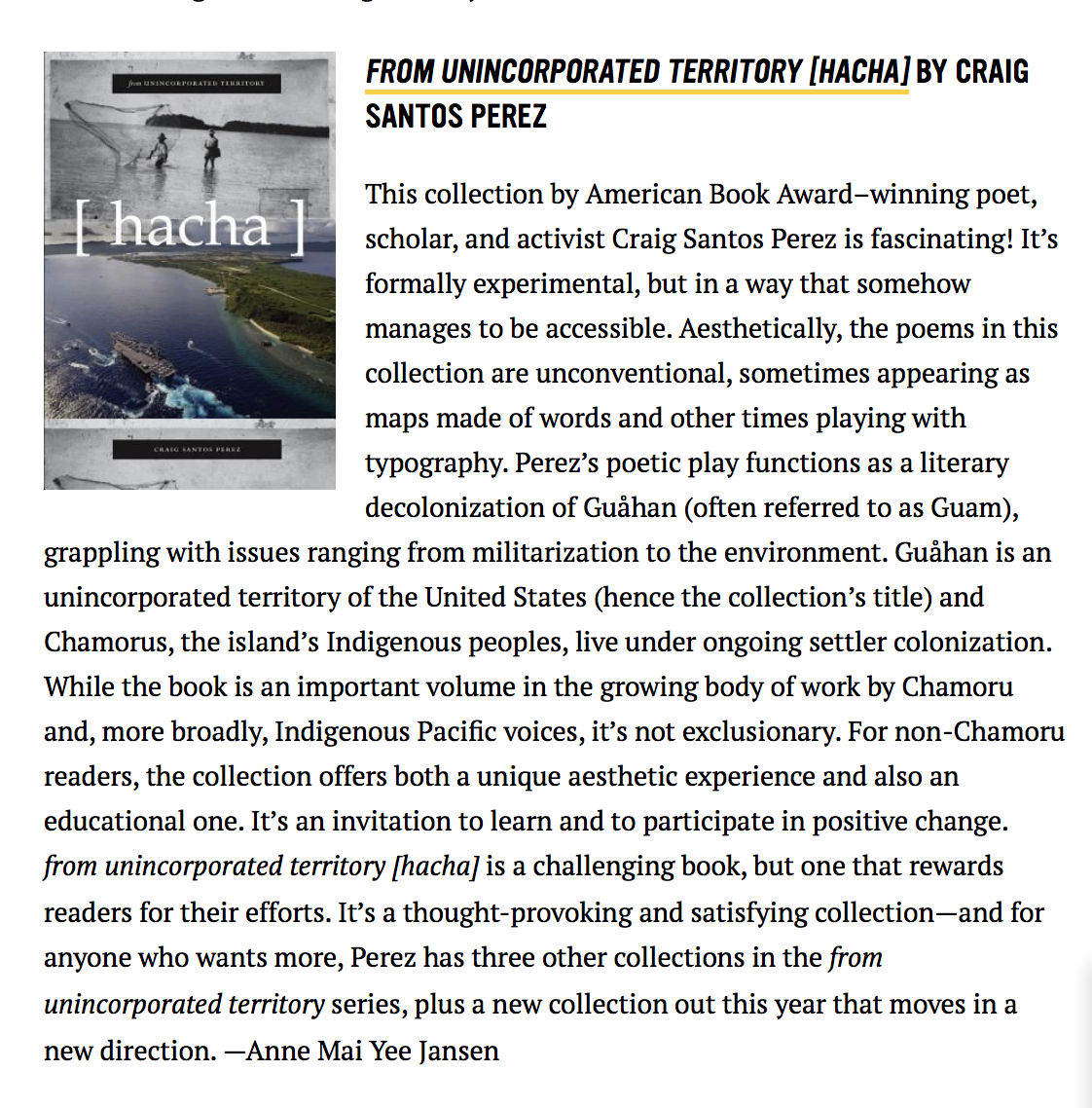